As of the late 1960's the first milk cooling tanks came to Holland to replace the old system of non-isolated, non-cooled, iron milk buckets. The Mueller O type milk cooling tank was among the first makes to enter the market. As it proved its quality soon, it became the most sold type of milk cooling tanks in the Netherlands. More than 40 years hence, the Mueller tanks prove to have a very long lifespan, making them very wanted on the second hand market. HAGRA can offer you a wide range of used Mueller milk cooling tanks in numerous models and measures of capacity varying from 720 liters to over 12,000 liters if necessary. Look at our current stock to see all the tanks that are available immediately.

On this page you will find information about the following Mueller tank types:

The original type of Mueller bulk milk coolers is the O type. In comparison to other makes, the striking oval look makes it easy to distinguish them. This oval form provides a very quick cooling effect, especially on the first milkings. The Mueller O-type is well-known for its low power consumption, which makes it very appropriate for warm environments and climates.
An other benefit of the Mueller O-type is the excellent finishing due to a supreme polishing workmanship. No other brand of milk cooling tanks can withstand a comparison with the Mueller O-type tank where the finishing is concerned, both on the inside as on the outside.
All O-type tanks are made of AISI 304 (DIN 1.4301) stainless steel. All Mueller tanks comply with NEN/ISO 5708 standards for milk cooling tanks. 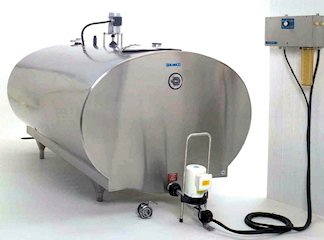 The "classic" O-type stems from the 1960's. It remained in production, without significant changes, until 1992. It is considered "classic" because this type of tanks has the control unit and the automatic cleaning unit installed on a wall nearby the tank, and not on the tank itself, which has become standard on younger tanks, as you will read further down this page.
The O-type capacity range varies from 1090 liters to a maximum of 19835 liters.
The table below shows all types, their capacity, and their measures.

The original O-type of Mueller milk coolers was renewed during the early 90's. The O-92 has the control and cleaning unit built on the the front of the tank. This reduces the costs of reinstalling considerably. The O-92 cooling and cleaning processes are controlled electronically, instead of the electromechanical control system of the classic O-type.
O-92 tanks have a capacity range of 1090 up to 23840 litres.
The table below shows all types, their capacity, and their measures.

In 1994 Mueller Europe introduced the P-type milk cooling tank. The P-tank is cylindrically shaped, and not ovally, like the Mueller O-type. The P-type is mainly used in those situations where the tank room is too narrow to place an O-type tank. The P-type, with lesser width and more length, can be suitable then. The P-tank has the electronic control and cleaning unit mounted on the front of the tank. This reduces the costs of reinstalling considerably.
The P-type capacity range varies from 1280 liters to a maximum of 25280 liters.
The table below shows all types, their capacity, and their measures.

After the turn of the century, the renowned O-type was modernised again. The emergence of robotic milking systems has led to an need to control the cooling and cleaning process much more precisely, and in communication with the milking robot. The so-called MIII(M3) control system, which is used on the modern Mueller model O-type (and P-type) milk cooling tanks, can be considered completely computer-controlled. The modern O-type has the control unit and automatic cleaning system mounted on the front of the tank.
The modern O-type capacity range varies from 1730 liters to a maximum of 36550 liters.
The table below shows all types, their capacity, and their measures.

The RHS type of Mueller milk coolers is designed for smaller quantities of milk. As the pictures reveal it is an "open" type, that is, in stead of just a manhole the lid covers the entire top of the tank. RHS tanks have a capacity range of 400 to 1200 litres.
The table below shows all types, their capacity, and their measures.

Besides cooling, MUELLER milk cooling tanks can also be used to heat a fluid or simply to keep it isolated and warm/cold. See storage tanks for further information on this issue.